You are using an outdated browser. Please upgrade your browser to improve your experience

Home / Not Another Retrospective What is a Retrospective, and how to know it might need fixing? 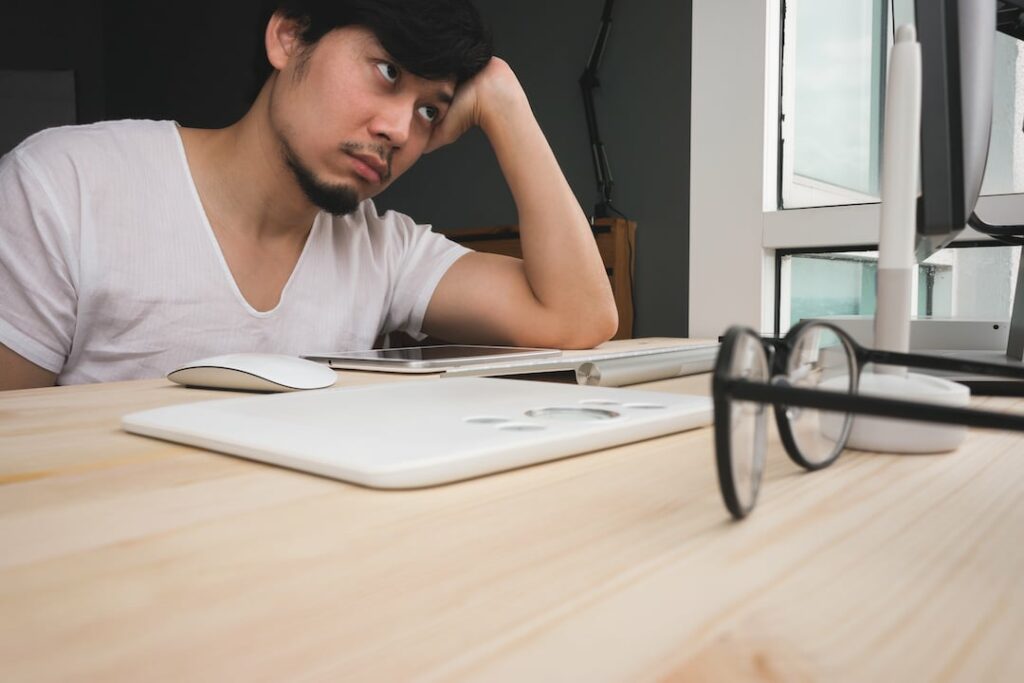 Is this what you feel when you look into your work calendar for the next week and see “Retrospective” appearing in it?

Do you dread the thought of having to sit down with your team members and go through yet another round of the classic “The Good, The Bad, and The Ugly” Retrospective again?

So you sit down, someone shares the link to the board, and you and your team go right into it – filling out the columns and then reading it out one after the other. If you are lucky, somebody will pipe up that they agree with the previous person’s suggestion and give you a quick nod of approval. If not, then the retrospective drags on for longer than you think it should, and everyone starts to feel frustrated…and just wait for it to end, only to have the same issues pop up in the next retrospective – leaving you with that same old feeling in the pit of your stomach every time you see “Retrospective” in your calendar the following week.

Feels a bit like “Groundhog Day!” doesn’t it? Well, here’s some good news – there is a better way to do a retrospective (and actually enjoy them). And it’s not the tool that will make the difference

But let’s start with the basics – what is a retrospective?

The Scrum Guide describes the Sprint Retrospective as:

“The purpose of the Sprint Retrospective is to plan ways to increase quality and effectiveness.

The Scrum Team inspects how the last Sprint went with regards to individuals, interactions, processes, tools, and their Definition of Done. Inspected elements often vary with the domain of work. Assumptions that led them astray are identified and their origins explored. The Scrum Team discusses what went well during the Sprint, what problems it encountered, and how those problems were (or were not) solved.

The Scrum Team identifies the most helpful changes to improve its effectiveness. The most impactful improvements are addressed as soon as possible. They may even be added to the Sprint Backlog for the next Sprint.

The Sprint Retrospective concludes the Sprint. It is timeboxed to a maximum of three hours for a one-month Sprint. For shorter Sprints, the event is usually shorter.”

It doesn’t specify, though, how to run a Retrospective so that it really drives positive change for your team (as opposed to just trying to get through to the end of the event as quickly as possible)! While it leaves freedom for teams to find their own way of conducting a Retrospective, I more often see teams struggling with this. Retrospectives run on autopilot without much thought given to how they could be improved. The team just falls into the same patterns, often yielding the same results (or lack thereof). And soon, teams lose faith in the process and see it as a waste of time and either give up on it altogether or just go through the motions without really getting anything out of it. This probably was also the birthplace of the 15-minute “stand-up” retrospective, which is a whole other topic for another day!

In my experience, there are six common signs that your retrospective might need improvment. 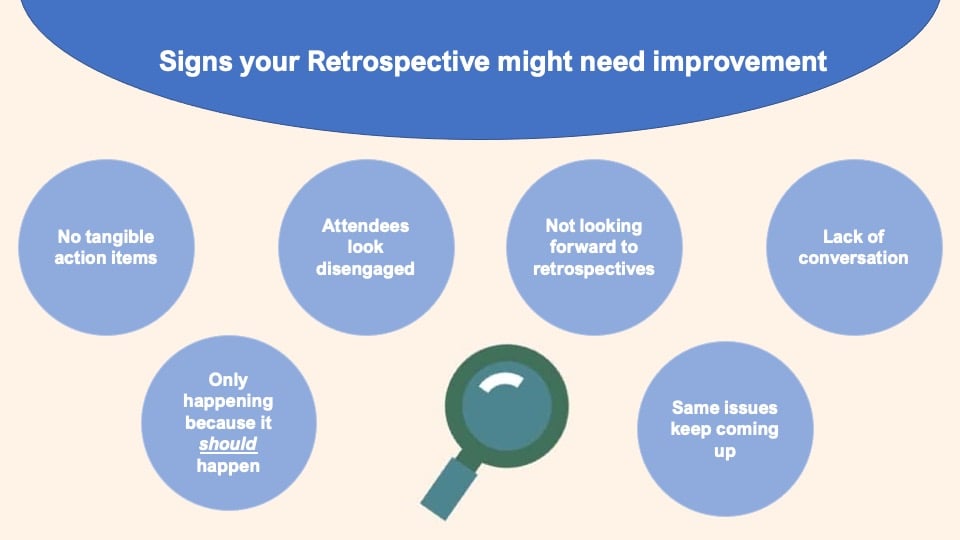 – You are not looking forward to your next Retrospective

– The Retrospective doesn’t produce the desired results, a.k.a no action items

– The same issues keep coming up in Retrospectives without being resolved

– People are not paying attention or seem disengaged during the Retrospective

If any of these sound familiar to you, then you have room for improvement. But don’t worry – it’s not that difficult to make things better!

5 ways to fix your Retrospectives

The “5 phases of a Retrospective” is a simple yet effective framework that can be used to structure your Retrospectives. Esther Darby and Diane Larson originally came up with this framework, which has since been popularized by the Agile community. The 5 phases consist of the following:

Set the goal; Give people time to “arrive” and get into the right mood

Help everyone remember; Create a shared pool of information (and understand that everyone’s view of reality looks different)

Why did things happen the way they did? Identify patterns and see the big picture

Decide what to do

Sum up the results, leave a good feeling for participants and ask for feedback

The 5 phases of a Retrospective can be adapted to any team’s needs, and they provide a good starting point for those who are new to the world of Retrospectives. Reading the book by Esther and Diane is something I can highly recommend.

Too often, Retrospectives are run simply because it’s “the norm.” But the “norm” can quickly become outdated and ineffective. If you want to improve your Retrospectives, start by asking yourself this question: Are my Retrospectives actually achieving the desired results? If they don’t, then ask yourself another question: what can I do to improve them? Often, the answer to this question is relatively simple. There are plenty of sites available that can help you to set up your next Retrospective. Retromat is my personal favorite, as it offers you plenty of options for each of the 5 phases. And by looking through your options, you actually have already started to think about how you would like to conduct your next Retrospective.

When it comes to how to run an effective Retrospective, your choice of interaction model can make all the difference. This became even more important since most teams moved to a virtual setup, but is relevant even when you’re all in the same room. I usually like to take certain pieces out of the Liberating Structures (https://www.liberatingstructures.com/) toolbox. For example, I use 1-2-4-all to generate insights and give everyone 1 minute to think about their answer individually, then put them into pair (breakout-room) for 2 minutes and sometimes even into a group of 4 to discuss and refine their insights, and only then facilitate a conversation in the complete group. Other times I had my team members swap their pairs several times, and it ended in an approach that looked a bit like a speed-dating exercise. These techniques have the goal of helping everyone to be able to contribute with their insights without the pressure of being put on the spot in front of the whole group. It gives each person a chance to feel comfortable and safe with speaking up, as well as listening to what their team members came up with.

This one is key for your teams in order to continue to see value in Retrospectives. Imagine that not being the case – would you like to spend time on something that feels meaningless to you? If this would occur in your private life, you probably would drop the activity pretty quickly. Your team is no different in that respect. That is why it is important to have action items that are tangible and achievable. Often times teams will come up with action items that are too big or simply not in their own hands. If this occurs to you, try a Liberating Structure called “15% solutions” and ask your team to come up with a small, tangible action item that can be started right away or latest, the next morning. With this approach, we see progress a lot quicker and will, with time, get into a habit and take over bigger responsibilities that will help us grow as a team. Do also make sure to have the action items visible for your team throughout the next sprint. This can be done via a team board or by including them in your task tracking tools (Jira, Azure, etc.). That way, everyone will be able to see what everyone else is working on and how they can help. Teams that practice this and see the results will get more and more motivated.

I do believe that it is healthy to create a certain routine when it comes to Retrospectives, but at the same time, it is also a great idea to surprise the team once in a while. A way to achieve this is by picking a theme for the Retrospective that changes between sprints or doing something that your team is not expecting at all. How about a “silent Retrospective” where only the facilitator is allowed to speak? Or taking the team out for coffee (do not forget your sticky notes) and having a Retrospective while having coffee (I have also seen teams replace coffee with after-work drinks). The idea of this is to put some variety into Retrospectives and make the process more interesting and get team members out of their status quo zone, which will help them open up more and trigger new thoughts and ideas.

As you might have noticed, I do not mention any of the Retrospective tools. Do not get me wrong, I do use whiteboard tools quite a lot for my virtual Retrospectives, but I have seen too many that think that the tool will be the difference maker (and to be quite frank, some tools just give me the chills just because of their design), but the reality is, the tools are just there to support you as a team to capture discussions and ideas. I do believe that if you consider the five points I mentioned in this blog, you will see a bigger impact on your team.

Retrospectives are surely something we at the Agile Mastery Institute help Scrum Masters to develop in the Scrum Mastery Pathway program. In our Navigator modules, we might even dedicate an entire session to Retrospectives or different facilitation techniques. 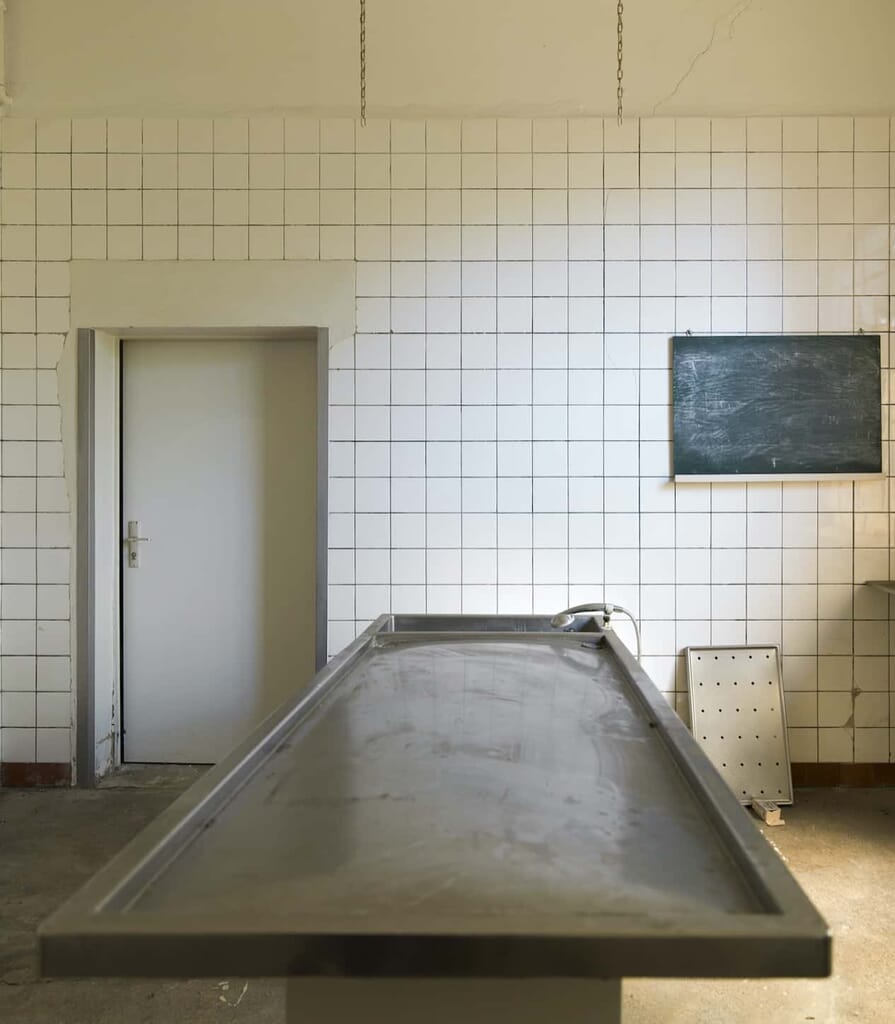 Do your retrospectives feel stale or boring or - even worse - are they more like project autopsies? Get some top tips to freshen things up and make them great again.

Pop your email in, and we'll send you regular tips & insights.

We use cookies on our website to give you the most relevant experience by remembering your preferences and repeat visits. By clicking “Accept”, you consent to the use of ALL the cookies. However you may visit Cookie Settings to provide a controlled consent.
Cookie settingsACCEPT
Manage consent

This website uses cookies to improve your experience while you navigate through the website. Out of these cookies, the cookies that are categorized as necessary are stored on your browser as they are essential for the working of basic functionalities of the website. We also use third-party cookies that help us analyze and understand how you use this website. These cookies will be stored in your browser only with your consent. You also have the option to opt-out of these cookies. But opting out of some of these cookies may have an effect on your browsing experience.
Necessary Always Enabled
Necessary cookies are absolutely essential for the website to function properly. These cookies ensure basic functionalities and security features of the website, anonymously.
Functional
Functional cookies help to perform certain functionalities like sharing the content of the website on social media platforms, collect feedbacks, and other third-party features.
Performance
Performance cookies are used to understand and analyze the key performance indexes of the website which helps in delivering a better user experience for the visitors.
Analytics
Analytical cookies are used to understand how visitors interact with the website. These cookies help provide information on metrics the number of visitors, bounce rate, traffic source, etc.
Advertisement
Advertisement cookies are used to provide visitors with relevant ads and marketing campaigns. These cookies track visitors across websites and collect information to provide customized ads.
Others
Other uncategorized cookies are those that are being analyzed and have not been classified into a category as yet.
Save & Accept